Shri Shyam Sunder Kejriwal, a prominent entrepreneur and philanthropist, strongly felt that the development of India as a modern, progressive, prosperous, and self-reliant country depended entirely on the creation of a well-informed and educated citizenry. It was with this vision that he established M. C. Kejriwal Vidyapeeth on 15 June 1997, and created, with a missionary zeal, an institution that would, one day, under his Chairmanship, be ranked among the top ten boys’ schools in the Kolkata region (Education World Survey, 2019).

Concerned about the negative impact of modern life-style on people’s health, Shri S. S. Kejriwal ventured into the domain of healthcare by establishing MCKV Health and Medicare in Liluah, Howrah, in addition to supporting a hospital in Ramgarh, Rajasthan, set up by his father, the late Shri  Chagganlal Kejriwal. Beyond his role as the Chairman of the MCKV Group of Institutions, Shri S. S. Kejriwal served on the board of trustees of several reputed institutions of Kolkata and Howrah.

The entire MCKV community mourns the loss of Shri S. S. Kejriwal, and prays that his beautiful soul rest in peace. May God also grant the members of the Kejriwal family strength and courage to bear this immeasurable loss. 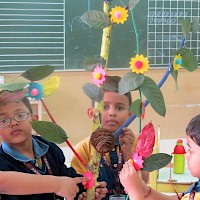